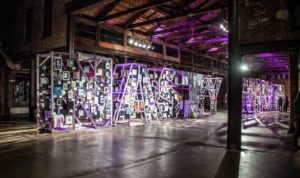 The Nasty Women Art Exhibition in Queens, NYC, ended Sunday. They have shared that they SOLD OUT the entire show. Over $42,000 in proceeds raised will go to Planned Parenthood. The Knockdown Center’s programing “Stay Nasty” also raised over $8,000 for smaller non-profits benefiting women’s rights, bringing the grand total to over $50,000.

You can read more about the evening here: 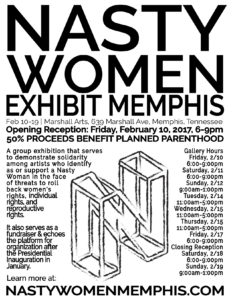 You can help Nasty Women Memphis by printing and distributing our Call to Artists before the January 27, 2017, deadline and our Flyer, at any time. We want to get the word out to as many artists who would like to join in our effort of solidarity defending women’s rights, individual rights, and reproductive rights. Distributing our flyer will help get the word out for patrons to attend our exhibit, buy art and support Planned Parenthood.

In coordination with the National Women’s March on Washington, a local Memphis March will be held beginning at the Shelby County D’Army Bailey Courthouse and continuing down Second Street. It will end with a rally at the National Civil Rights Museum, pending approval and permits. To keep up with updates and make plans to attend this event, please visit the Facebook page for the Women’s March on Washington: Local Memphis March at:

I hope all of our Nasty Women artists and supporters will be marching together on January 21st and supporting the powerful protest against the Trump presidency in the Memphis Women’s March!