Kenny Ellis is our resident NASTY man, doing any and everything we ask of him to make these exhibits happen. Kenny is Chelle’s husband, and Danielle’s unofficial adopted Dad. We love and appreciate you, Kenny! <3 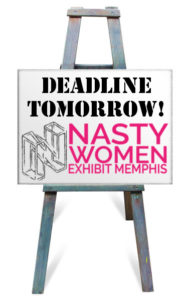 Have you submitted your piece to the Nasty Women Memphis Art Exhibition yet? The deadline is Friday, January 27, 2017 (TOMORROW). If you ran out of time to make something specifically for the show but have something already made you’d like to put in (or if you have something nearly finished but you need a few days past the deadline), please go ahead submit your piece at www.nastywomenmemphis.com/submit-work/ so we can make sure you and your art are in our system.

This exhibit is turning out to be better than we ever imagined, you don’t want to miss a chance to include your work in this show! 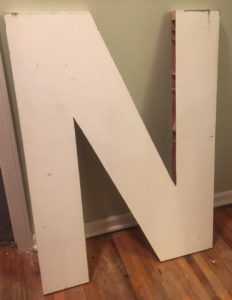 My Kenny is working on what will be the 3D letters in the Nasty Women Memphis Art Exhibition.

Yes, that letter N is made from an old door, and it’s setting in my hallway with the unfinished floor!  If it gets any more grass roots than this, I don’t know how!  🙂

These letters will be bridged together with dowels, front to back, painted pink and covered in black mesh. 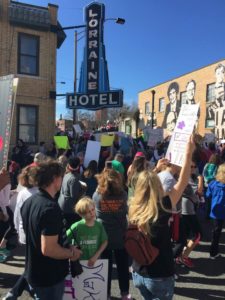 My husband, Kenny, and I were happy to join the courageous women, men and children marching in the Memphis Women’s March this morning! The expected number of 3,000 peaceful protesters nearly tripled in attendance at the Judge D’army Bailey Courthouse, where the march began. Speakers before the march were US Representative from TN, Steve Cohen, and Adrienne Bailey, widow of civil rights activist, Judge D’Army Bailey, who encouraged the attendants in their march and to take the long, hard, fight forward. It was spirit-lifting to see the turn-out of so many like-minded people, defending women’s, African-American, LGBTQ, immigrant, and individual rights during the march. Thank you to the organizers of this event, it was beautiful to be a part of this momentous movement.